Spain
Founded in 1891 by Bernardo Ortiz de Zárate went to Álava with the idea of setting up a new business. After learning the trade of canning from his brother-in-law, he began his career in the canning industry. His job was to purchase anchovies and north coast tuna from the coastal fishermen in the harbors, and, using pickle and wooden barrels to preserve the fish, he was able to sell them the following day throughout the north of the region of Castile. He invented and implemented a system of mobile factories which worked exclusively on the coast to maximize his company's performance. Over the years the business grew and was passed down from generation to generation. Over time the art of preserving improved and Conservas was able to open 5 factories along the coast of the Basque Country. As the business grew, they expanded to exporting to Italy and countries with Italian immigrants including North America. The fifth generation of the same family still owns the company today.

Conservas Ortiz has a great respect for their ancestors and their traditions. They believe in coastal fishing based on the tides, and the exclusive purchase of north coast tuna which are line-caught, one-by-one.

Conservas Ortiz is concerned about the future of fish as well as how to regenerate the species that they catch. That is why they use certain practices to catch fish. First, they use live bait to attract the fish. Live bait is a traditional fishing technique that has been widely used throughout history by Cantabrian fishermen.The first step is to get the bait out of the sea, very carefully. For this they use dip nets and it is then be kept in their nurseries for several days. The fishermen use hoses to imitate the movement of the shoals of fish. When fishing starts, the fishermen line up along one flank of the boat. The rods have a short line with the live bait on the hooks. If the shoal is made up of very large fish then the men work in pairs. 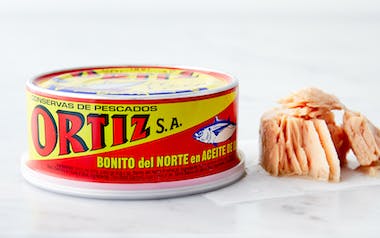 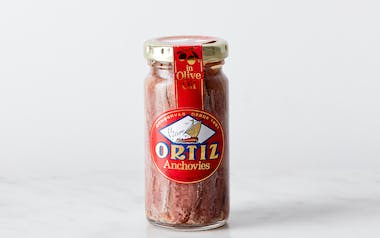