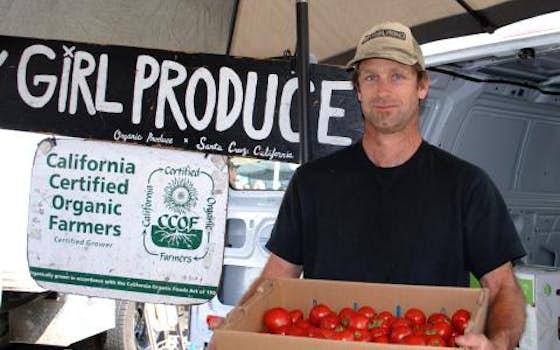 Santa Cruz
Dirty Girl Produce is a 40 acre certified organic family farm located in Santa Cruz County, Ca. We grow over 20 varieties of fruits and vegetables and sell our produce to customers and restaurants at 10 farmer’s markets in Santa Cruz, Berkeley, and San Francisco.

Farm owner Joe Schirmer grew up in Santa Cruz and began working at Dirty Girl Produce in 1997. He purchased the farm in 1999. Joe is a graduate of UCSC and the UCSC Farm and Garden Apprenticeship Program and has worked on several farms throughout the west coast. Joe currently sits on the board of directors for CUESA (Center for Urban Education on Sustainable Agriculture) which runs the San Francisco Ferry Plaza Farmers Market and is past President of the board of directors for the SCCFM (Santa Cruz Community Farmers Markets).

Joe's wife Miranda Schirmer has been involved with various aspects of the farm since 2000. Today she updates the DGP website, cooks and preserves the farm's produce for family and friends, and is busy raising DGP's two youngest farm-hands and food-lovers: Joe and Miranda's sons, Charlie and Calvin.

Sales Manager Stella Araiza has worked for the farm since 2004. Stella's at the Ferry Plaza Farmers market in SF most Saturdays, in Berkeley on Tuesdays and always on the phone! Stella takes care of millions of things around the farm, including coordinating all restaurant orders, staffing markets, and bookkeeping. She's also mama to the farm's littlest "dirty girl," Lucia.

Dirty Girl Produce is also lucky to have a kick-ass field crew led by our long time field manager, Eugenio Antonio Lopez. What can we say about Genio and the field crew? They plant, tend and harvest all the DGP produce. They are incredible.

Market manager Megan Vanderbeck has worked for DGP since 2010. You can see her at the Berkeley market on Tuesdays, the Downtown Santa Cruz market on Wednesdays and the Stonestown Market in San Francisco on Sundays. She has an adorable dog named Tucker and a hen house full of chickens she calls the "featherbottoms."

We are also lucky to have a crew of farmers market amigos who make the DGP stall a fun and fascinating place to buy produce: Jesse Schlesinger has been involved with DGP since 2000. He helps out at the Ferry Plaza market most Saturdays. He is also an amazing artist (check out his work: http://www.inthemake.net/Jesse-Schlesinger). Sierra Schlesinger has been a friend of the farm since 2004 and also helps out at the Ferry Plaza market most Saturdays. Sierra is a fantastic cook, recipe writer, and food-blogger. Finally, the awesome Travis Jackson has been with us since 2009, delivering produce and helping customers at the DGP stall in SF and Berkeley.
0 Product
Sign In / Sign Up
Reorder