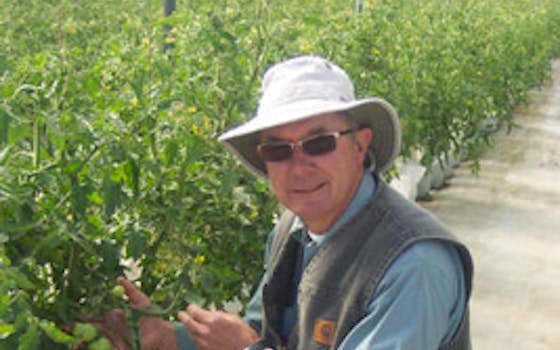 Hans Wilgenburg was born and raised on his family’s dairy farm near San Diego. While earning a degree at Cal Poly in Crop Science, Hans met his future wife, Sharon, who was studying Dietetics and Food Administration. They moved to Dinuba in 1987, and Hans founded Wilgenburg Greenhouses in 1989. Their son, Mathew, and daughters, Naomi, Carey, and Libby, were the first to enjoy his tomatoes and European cucumbers.

Handled with “kid gloves” is how Wilgenburg’s tomatoes are harvested today. Each worker wears cotton gloves when picking and packing the fruit. Bumble bees pollinate the tomato flowers, searching and finding the flowers that need to be pollinated. They only work the flowers that have pollen available for them to store. Good pollination is essential to achieve the final result of a good, firm, tasty and juicy tomato.

Flavor and nutrition are intertwined in Hans’ philosophy and practice of farming. Compost for the fertilizer is made on the farm. Hans became a worm farmer, using the worm castings to further enhance the nutritional value of the soil medium, in which the tomatoes and cucumbers are grown. The good health of both the soil and plant has a direct correlation to the health and flavor of the fruit.