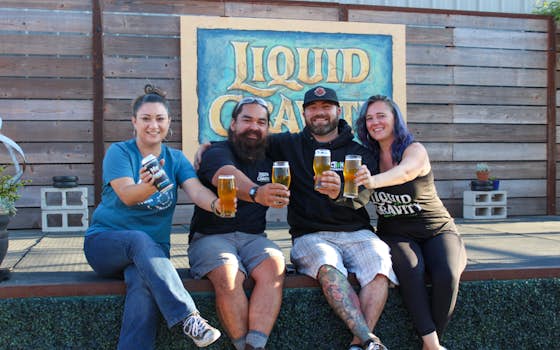 Liquid Gravity Brewing Company utilizes only the best grain and hops in every beer they make. Family owned and operated, owners Brendan and Celeste Gough pour their heart and soul into the beer they produce and the craft beer community they call home. Every employee at Liquid Gravity makes a living wage along with health insurance and PTO. Creating a work environment of appreciation and equality is of the upmost importance. Brendan Gough is best known for his time at Central Coast Brewing. During his tenure as Director of Brewing Operations Brendan garnered numerous medals from the top beer competitions in the world. Winning 5 medals at Great American Beer Festival in 4 years, along with a Gold Medal for his IPA at the World Beer Cup in 2016. He brought the same passion for brewing to Liquid Gravity Brewing Company, which features a rotating menu of new and innovate beers along side traditional beer styles he’s best known for. Since opening Liquid Gravity Brewing Company in 2020, Brendan has won a Silver at the World Beer Cup for his Liquid Gravity IPA, and a Bronze medal at Great American Beer Festival for a specialty West Coast IPA Mo' Diggity.