Lassen Ranch grows on about 25 total acres, split between their land in Petaluma, CA, and their land in McArthur, CA (in Shasta County). As one of the last remaining commercial Peony growers in California (most Peonies are brought in from Oregon or flown in from Alaska), Victor Neve, his son, and small crew of locals in McArthur grow these beautiful flowers, along with Lilacs, Viburnum, Ilex and Clematis. While owner Victor Neve does most of the year-round work himself, along with one full-time employee, there are other growers in their small town whose crops neatly complement each others' off-seasons, so that the small agricultural workforce in the town doesn't need to travel to and from various growing regions.

While Lassen Ranch isn't certified organic, they do have to adhere to strict California pesticide use restrictions, and do their best to limit spraying wherever possible. They only spot-spray for weeds, and only spray an insecticide once at the beginning of the peony season to prevent thrip damage. Their Lilacs and Viburnum aren't sprayed at all.

Victor has been growing flowers for nearly his entire life, coming from a family of flower growers that has maintained its roots in California while most of the industry has moved to Southern Hemisphere imports. He loves what he does despite the hard work, because that hard work pays off in some the most beautiful California-grown flowers around. 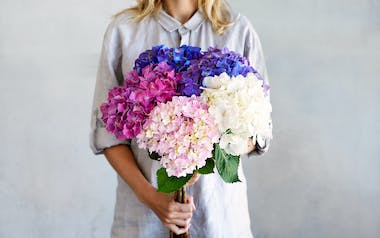