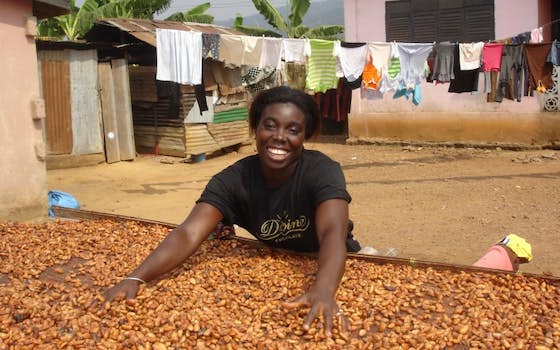 In the early 1990s, Ghana's structural adjustment program involved the liberalization of the cocoa market. A number of leading farmers, including a visionary farmer representative on the Ghana Cocoa Board, Nana Frimpong Abrebrese, came to realize that they had the opportunity to organize and work together. These farmers pooled resources to set up Kuapa Kokoo, a farmers' co-op, which would trade its own cocoa, and thus manage the selling process more efficiently than the government cocoa agents. Divine Chocolate is a part of Kuapa Kokoo ("good cocoa growers"), whose mission is to empower farmers in their efforts to gain a dignified livelihood, to increase women's participation in all of Kuapa's activities, and to develop environmentally friendly cultivation of cocoa.

Kuapa Kokoo weighs, bags and transports the cocoa to market and carries out all the necessary legal paperwork for its members. Kuapa strives to ensure that all its activities are transparent, accountable and democratic. They now have over 65,000 members across approximately 1400 village societies. In 1997, the farmers voted to invest in a chocolate bar of their own. Divine Fairtrade chocolate, made from Kuapa's "best of the best" fairly traded cocoa beans, was launched in October 1998. Today Divine's chocolate bars come in more flavors and varieties than ever, but they always hold true to their core values and principles.
0 Product
Sign In / Sign Up
Today 90039
Reorder